Media coverage - the good and the bad

I was told quite a while ago that you've not really made it as an author until you receive your first bad review. Well it took a little while, but as of this weekend I have finally made it!

Reviews of Perfect North so far have been overwhelmingly positive. But this weekend a reviewer in Spectrum, in a very short piece that really just summarised the book's plot, ended by saying that the story was intriguing but the writing was "wooden and pedestrian". I must admit that when I first read those words I was quite hurt. But not everybody is going to enjoy the style of every book, I reminded myself.

Then I read all of the other reviews and stories that also released this weekend (see below) and my mind was once again put at ease.

A novel is an artwork, no matter who writes it. It is an enormous undertaking that requires much energy and emotion and if it is published then that indicates that it is of great value to at least a segment of the reading public. But as with any artwork, it will also draw negative criticism. All you can do, I guess, is hope that most coverage is positive, as it has been for Perfect North. 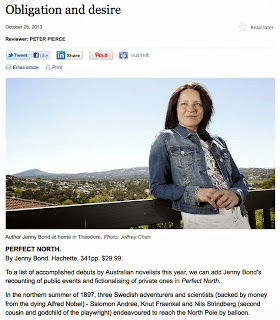 Bond's debut novel, Perfect North, has been described as ''strikingly original''. It's a book that is essentially a work of the imagination but one anchored in fact. It takes the expedition, draws out the characters, and presents a work that's both fascinating in its detail and intriguing in its storyline.
The Canberra Times
See full story

To a list of accomplished debuts by Australian novelists this year, we can add Jenny Bond's recounting of public events and fictionalising of private ones in Perfect North.
Sydney Morning Herald / The Canberra Times
See full review