PRAISE FOR THE PRESIDENT'S LUNCH

This captivating story by Canberra-based Bond expertly
reimagines the inner workings of the Oval Office in the
lead-up to World War II. Defty merging political drama,
scandals and romance, and featuring cameos
by historical icons, this is a terrific read.
Who magazine, August 2014

Canberra author Jenny Bond has written a fascinating account of another national administration - that of Franklin D Roosevelt, whose four-term stint in the White House took in the most formative events of the 20th century, from the Great Depression to the end of World War II.
Bond's fictional main character is a young teacher, Iris McIntosh, who loses her job and is living on the kindness of strangers when she meets Eleanor Roosevelt at a gas station. Moved by the plight of a fellow teacher, Mrs Roosevelt urges Iris to call on her in Washington. The result is a job at the White House.
In a lively and compelling narrative, Bond explores the successes and failures of Roosevelt's presidency, his relationships with his wife and two other long-term attachments, and hard-working Eleanor's affectionate relationships with her female friends.
Adelaide Advertiser, July 2014

Who cooked the worst meals in the history of the White House? No argument, apparently: it was Franklin D. Roosevelt’s housekeeper Henrietta Nesbitt, a woman so committed to Depression-era austerity measures that the president was seldom served a tolerable meal. In her new book The President’s Lunch, author Jenny Bond slyly suggests at one point that the cook’s Oriental Chicken was responsible for tensions with Japan.
The Australian, August 14, 2014


Jenny Bond's second novel The President's Lunch has struck a rich vein of fascinating material that blends fact with fiction ... Bond allows the levity of the relentless serving of inedible meals, whether the guests be Kings, Prime Ministers or family, as an entertaining counterpoint to the true drama of the day. Bond balances the two aspects of her novel so that the seriousness of the issues faced by the Roosevelt administration are never undermined but equally, the reader is offered intimate insights into life behind the public facade.The Hoopla, August 2014

The President’s Lunch is not only a fabulous portrayal of life in the White House in the 1930s and 40s but also an amazing story of a woman who hits the very bottom but takes an opportunity to rise to the top.
1girl2manybooks blog - see review HERE

Set during a fascinating time in history, The President’s Lunch goes behind the scenes of The White House during the Roosevelt era. Weaving fiction with fact, Bond’s fascinating insight into the life of the First Lady Eleanor Roosevelt makes for riveting reading ... If you are a fan of historical fiction you will thoroughly enjoy this riveting tale of love and power in The White House.
Culture Street - see review HERE

I loved this book and truly felt I was in the White House watching not only Eleanor and FDR but also witnessing a rebirth of America as they brought her out of depression and reluctantly faced a new challenge: war.

---------------------------
"I really enjoy well-written and researched historical fiction and that’s exactly what The President's Lunch is. While I don’t have a big interest in American political history the story of Iris and the interactions she has with the people around her is the very thing that hooked me. The fact that I may have learnt something along the way is an added bonus. Set in the 1930s and 1940s, a period of huge political and social change across the world, The Presidents Lunch is a story that will be enjoyed by most. The fact that Jenny Bond is able to write so eloquently about a place and period in a time so different to the Canberra that she lives in today just amazes me."
HerCanberra - see review HERE
---------------------------

"Dear Jenny,
Invited to Christchurch by the Kiwi government last week I brought your book. I must confess that it was hard to let go of it once I started reading. I understand completely why your publishing house asked to have a second book written by you.
Of course it was good fun to read about Stockholm and the streets I walked so many times. But what I see as your greatness as a writer Jenny, and what I loved so much in your book, is your ability to describe so well the different characters in the story with complicated, deep and wonderful personalities. As human beings are, they're full of untold feelings and always – as with all of us – have frequent second thoughts!
Thanks for a wonderful book. I would love to see it translated into Swedish!
Kind regards,
Sven-Olof"

Bond's debut novel, Perfect North, has been described as ''strikingly original''. It's a book that is essentially a work of the imagination but one anchored in fact. It takes the expedition, draws out the characters, and presents a work that's both fascinating in its detail and intriguing in its storyline.
The Canberra Times
See full story

"This debut novel is based on a true story so tragically romantic you couldn't make it up. Set at the end of the 1800s, at the height of the heroic age of Arctic exploration, it tells of the party of scientists who joined the scramble to reach the North Pole - aboard a hydrogen balloon. This is the story of young balloonist Nils Strindberg, or rather, of the fiancee he left behind, Anna, and the imagined truth behind the passionate love letters they exchanged, which were recovered with the men's bodies on an island, 30 years later. The result is a hugely enjoyable speculation on what could have been ... even if it likely didn't."
Jennifer Byrne, Australian Women's Weekly, December 2013


To a list of accomplished debuts by Australian novelists this year, we can add Jenny Bond's recounting of public events and fictionalising of private ones in Perfect North.
Sydney Morning Herald / The Canberra Times
See full review

"Blending fact and fiction, it's a story of love, exploration and mystery. The backdrop is the North Pole and the competitive challenges of scientists and adventurers. In the late nineteenth century three Swedish scientists begin their expedition in a hot air balloon to try and conquer the Arctic. Tragedy befalls the trio, until a Norwegian team finds their remains on the frozen island of Kvitoya in 1930.
A young journalist travels to the area, where he discovers amongst the eerie debris, the love letters of one of the scientists, Nils Strindberg to his fiancée Anna in Stockholm. An engrossing and compelling tale of secrets, lies, family and the hard to find Anna. Perfect fodder for the holiday period or something different for your book club."
ABC Local, Clare Calvet's Book Of The Week
See story

"Perfect North is less the story of the explorers’ last days than the tale of those left behind. Anna’s entanglement with the Strindberg family is one that on the surface seems full of delight – and to the lonely Stubbendorff, a relationship of almost unimaginable affection – but at home, miles away from Nils’s love letters, the Strindberg brothers have their own devastation to deliver. This is a love story with a broken heart, during a time of exploration and long distances..."
Fiona Hardy, Readings
See full review HERE

"ABBEY'S BOOKSELLER PICK ----- This assured and compelling debut novel is based on real events. In 1897 at the height of the rush to reach the North Pole, a Swedish expedition set out to conquer the distance - by hot air balloon. One of the members was a young man related to August Strindberg, part of an accomplished and talented family, and engaged to Anna. When the expedition disappears, and as nothing is heard from them, she too vanishes.

Decades later, the remains of the balloon are found on a remote island, and the newspaper which originally sponsored the attempt sends a journalist, Kurt Stubbendorff, to the scene. There he finds the body of Nils Strindberg, and a cache of love letters. Moved by their contents, he decides to track down Anna and return them to her. But Anna had her reasons for disappearing, and as Kurt discovers, sometimes secrets need to be kept…

I found this to be a wonderful read, with an interesting narrative structure, psychologically rounded characters and passages of quite beautiful writing. Very satisfying, and very much recommended!"

---------------------------
"This book is so unassuming it could easily slide under the radar of the entire book world. I am telling you now not to miss it ... Perfect North is beautifully told, and I picked it up after being informed it would appeal to those who liked Burial Rites. There are atmospheric similarities, particularly in the fact that some things can most certainly not be undone and must therefore be lived with and each situation made the most of. I loved this book, and it is a privilege to read such great quality work. I'm looking forward to Jenny Bond's next book, The President's Lunch. What will it be like?"
Mercey Valley
---------------------------
"I have been looking for a new author whose work I can fall in love with. I like the idea of supporting an Australian author but was not overly interested in specifically Australian stories. This book hit the mark in every way possible. It's a beautiful piece of writing but not too highbrow. The story, set in Sweden as well as smaller parts in the UK and USA, is one of adventure, love, loss and mystery - but I won't give away any of its several twists. Actually, the true part of the story is fascinating, but the entire novel is an unbelievably intricate and well-planned tale."
Booktopia
---------------------------

"Perfect North is a fictional account of one doomed expedition to the North Pole in 1897. Three Swedish adventurers set off for the North Pole in a hydrogen balloon but never returned. When their remains are discovered decades later, a young journalist sent to report on the tragedy discovers a journal of one explorer, filled with love letters to his fiancée. Perfect North is Jenny’s first novel, but the manuscript scored her a two-book deal with Hachette. Her second novel will be published in 2014 and she is currently working on her third."
Writing Bar 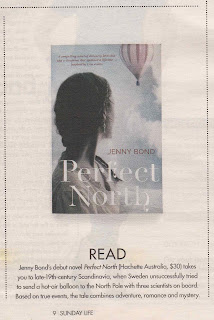